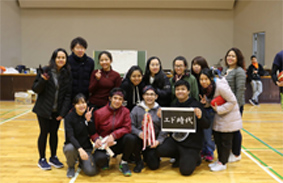 Last December 21, the school held its anual sportsfest. Here, the students together with the teachers played different games such as the common relay, obstacle relay, 6-legged race, jumping rope and tug-of-war. It was a good competition as well as a good form of relaxation for both the students and teachers. This year, the team called “Edo Jidai” won the whole competition. Despite members of the team were chosen randomly, it is as if the games were 1-sided as almost all the games were won by the same team.